The President’s Club has been quietly doing its thing for the past 30 years, raising not inconsiderable amounts of cash for charities. Rumours of bad behaviour have followed it for many years, but it wasn’t alone.

Stories regularly emerge from the City where women are the butt of bad behaviour from boorish well-paid bankers, lawyers and traders. The property world has largely escaped much of this scrutiny.

But this year is different. The tide has turned. Finally, our mothers, sisters, daughters have said enough is enough. It is about time. That in 2018, one hundred years after women gained the vote, women are still seen as playthings for the wealthy is more than just distasteful.

The President’s Club fall out is far from over. The FT, courageously, broke the story but the following week has seen all the media find new angles, with the companies and individuals named, all backed up in lurid detail.

The response from the PR world hasn’t been great. Very few, if any, of the companies attended have said anything. And when they did, it has been along the lines “well, he did attend, but didn’t stay long”, or “we’re appalled” and “we have cut ties with the…”.

If you were to believe the PR line, David Walliams played to a near empty room, and those left in the room would put a monk’s behaviour to shame.

It has even thrown those charities that benefited into a quandary.

So what should be done?

Starting with charities. Most members of the public would probably have some sympathy for them keeping the money and putting it to good use, and then refuse to have anything further to do with them or similar events. For many smaller charities it is probably a moot point as to whether they can return the cash, having it already spent it. Trustees should keep a closer eye on where donations originate from to spare future blushes.

For those businesses that attended, well that is more challenging.

Apologise, yes. And then apologise again. But that is not enough. That senior executives felt that it was OK to attend, and to bid for the prize of plastic surgery to ‘spice up your wife’, suggests that something is fundamentally wrong with the culture in those businesses.

The answer cannot simply be a few PR gestures and messaging. Businesses need to look at what is acceptable today, not yesterday, and educate and police behaviours that we as society hold to be fair and decent.

It is a real opportunity for the PR profession to rise to the challenge to truly shape the behaviour of their businesses. Be aware of how society is changing. A sexual harassment scandal in Hollywood is only just one small step away from your own business. Question and challenge senior executives. If it makes you and them uncomfortable, then great, you’re doing something right.

I am sure that the large majority of those that attended the President’s Club dinner are genuinely horrified by the allegations made and the behaviour they may have witnessed. They should use the anger displayed over the past week to effect real and lasting change. Then, perhaps, they can then be proud to tell their wives, daughters, sisters and mothers that they have shaped their business fit for tomorrow’s employees. 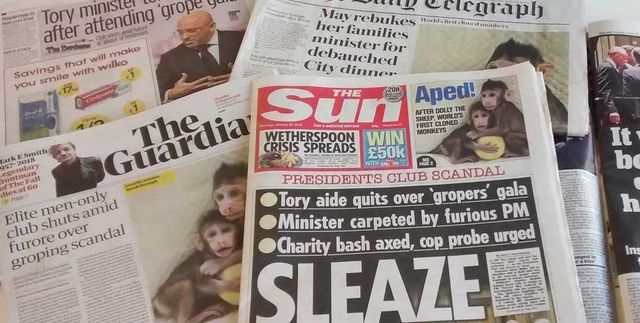