So sang Vampire Weekend in 2008.  But it would appear that in the US there are a lot of people that do.

Grammarians will be delighted by a case in the US where a Portland dairy has lost a US$10m court case that focused on, in this case, the lack of this grammatical oddity.

The case focused on overtime pay and the missing Oxford comma used to argue over the nature of their work.

So what is an Oxford comma? In a list - say of fish, chips and mushy peas - some people will use a comma after chips.  Equally, however, as many people would not bother.

So should we care about the Oxford comma?  Yes and no.  I would suggest you use one where it avoids confusion.

Or as BuzzFeed so eloquently put it.

"With the Oxford comma, we invited strippers, JFK, and Stalin."

Without the Oxford comma, we turn former world leaders into exotic dancers.

"Without the Oxford comma, we invited strippers, JFK and Stalin."

A class-action lawsuit about overtime pay for truck drivers hinged entirely on a debate that has bitterly divided friends, families and foes: The dreaded — or totally necessary — Oxford comma, perhaps the most polarizing of punctuation marks. What ensued in the United States Court of Appeals for the First Circuit, and in a 29-page court decision handed down on Monday, was an exercise in high-stakes grammar pedantry that could cost a dairy company in Portland, Me., an estimated $10 million. 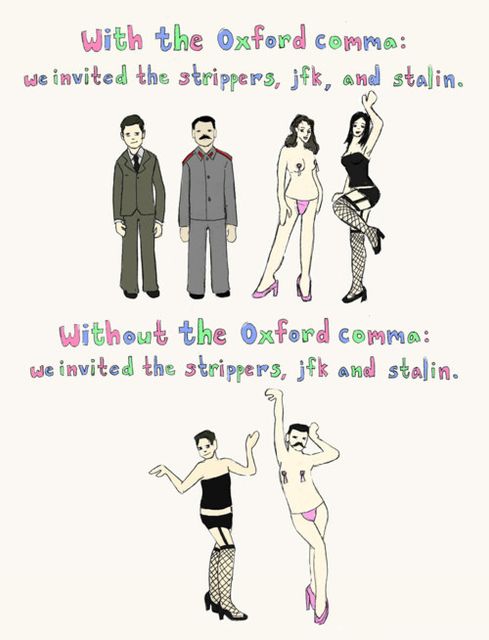 Truck drivers in Maine won an overtime lawsuit entirely because a state law didn’t use the Oxford comma https://t.co/OyobZHwrYa pic.twitter.com/Lsr7UB8x7G

The utter importance of the Oxford comma: https://t.co/K7WPPAgS9u